As soon as Ubuntu 11.10 Oneiric got accessible, I switched to it on three different machines.
I use two laptops at home Dell Studio 1555 and Lenovo x61.
And one box at work – pretty old computer, slow enough to have only console working normally there.

I got pretty messed in feelings on this new version of Ubuntu.
1. all these improvements made me feel more comfortable and my work smoother. my old box started working more efficiently since upgrade. In previous versions I had pretty lot of problems with memory leakage, I assume that this happened due to upgrade to kernel 3.0
2. I hate Unity. People from Canonical, why are you doing it to us? It is the way Microsoft used to go in previous versions of their OS. Every next version of Windows changes absolutely everything in UI without possibility to change back to the way it used to be. I setup my Windows 7 desktop to be more or less similar to what I had on Windows XP. The only thing people get from these changes is frustration and disappointment. 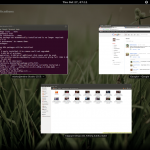 I switched to Gnome 3 view. I consider it little more usable, than Unity.
The only person who liked the changes was my son (5 years old), because he plays his animation movies on Dell laptop. But me and my wife, we are using computers for work. So we really do not need any bells and whistles – we need simple Desktop, as it used to be Gnome 2.
3. On my old box at work, I switched to Xfce in order to have similar view as it was for Gnome2 and pretty fast.

My wife asks me to revert to Ubuntu 10.10 at least on Lenovo x61. And I am thinking seriously about alternatives to Ubuntu, but seems that Gnome 3 has changed the pattern of desktop for all.