As I promised previously, I will try to tell a little what I did to get more than a thousand like for our page Is it kosher? on Facebook in 3 days.

A year ago I wrote a post about my experiments with promotion in Fracebook FB FACEBOOK: ПРОДВИЖЕНИЕ СТРАНИЦЫ ЗА ДЕНЬГИ (in Russian).
This time everything was absolutely different.

Day #1 (Monday)
Some time ago, I learned a theory, that Facebook promotes videos, which are uploaded directly to the social network better, than from other sites, like Youtube.
I got an idea to check this theory.
I prepared a small video with the latest features in our Android app and uploaded it to Facebook on our page. To be sure about results, I boosted the post for 18 EUR. Promotion was strictly segmented: United Kingdom, interests: Orthodox Judaism, Kosher food. Previously I tried this kind of promotion and the results were described a year ago.
Here is the post, I created.

And here is some statistics from this post promotion 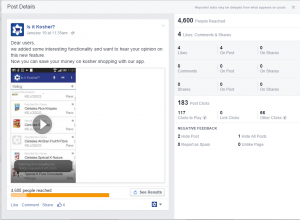 4600 people saw this post, 754 of them saw not by paid advertisement. 183 clicks were free of charge and 117 of them clicked the video to play. 791 views were paid. The results are not the most impressive, but the number of likes to the page grew critically. And this result is much more interesting, than previous experience.

Day #2 (Tuesday)
We got a wonderful video, which we did for our Indiegogo campaign. Is it kosher?: The story about a man who eats kosher.
I published this video many times on this page and in my profile. But for some reason, it was not spread as much as we wanted. Video is quite nice and funny, I like it very much. People, who saw it also like it. So, we could not understand why it is not spread so much as other funny videos (we got no kittens, but still it is funny).

So, I decided to try the same method – upload the video directly to the page. I counted on those, who liked the page previously. Is was absolutely clean experiment – no financial input. And here the story begins!
UK was the first who started watching the video. Next joined South Africa, next a little bit of Australia and Israel. Later some of USA, but America’s numbers are the same as before. This day number of likes grew for 600 new. Number of our apps users grew also – twice(!) for one day average statistics – from 250 to 497 this day. UK became the first one by number of users.

Day #3 (Wednesday)
It became clear, that people are talking about us – people from same schools started liking our page. Unfortunately, Facebook doesn’t give a lot of possibilities to track users, who liked the page. But following our statistic, people came like waves from a stone thrown to water. This day, France joined the marathon and again South Africa. Growth of likes lowered to 400, but number of active users of our apps grew up to 547 for one day.

Day #4 (Thursday)
Previous day showed, that effect loosed its strength and it is time to sum up the results. 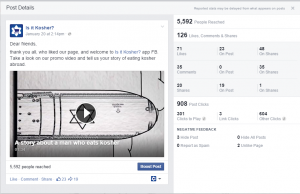 Our video was viewed by more than 5 thousand people for free. 19 shares, 71 like in total, 35 comments. 908 clicks to the link at the end of the video. I.e. 908 people watched till the end and clicked the link to open our site. Numbers of users on our site also grew and not only direct, but from search engines with keywords “kosher apps”, “is it kosher”, etc.

P.S. This post is translated one week later and now we have about 3000 like on our page.