Something extraordinary happened to me last month and I ordered cool underwear for a lot of money.
It is not my usual deal to show them to anyone except my wife, but this these stuff was so funny, that I could not stop myself from buying.
Seems like, that Midlife Crisis is upcoming over me.
Here is the best illustration to the event of unpacking the parcel with long awaited underwear

Not the best quality, but it is the best, I managed to find.

And now the story. I ordered them from Softwear For nerds.
I ordered with Dinosaurs and Godzilla. Instead of dinosaurs, I got one with Lego cubes. This small issue was solved after I wrote them an e-mail. I got an answer, that I can keep Lego underwear as a gift and they will send me dinosaurs.

Online shopping didn’t stopped on underwear. I ordered two t-shirts for free from Creative Mobile. They got such an event – t-shirts for free, you pay only delivery. Some spoilers: I will write about this company in a week again.
Ordered from here.

Please don’t think I am the only one who spends a lot of money on clothes.

Bought a t-shirt for my son with Minion. Actually, they don’t sell this kind anymore. 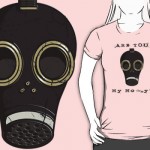 my wife got this one. Now, our son calls here “Are you my mommy?” and yesterday some nerd in trolleybus asked her if it is from that exect TV show?

I ordered t-shirts from RedBubble. Minion was ordered later than Mommy and it was delivered in about one and a half weeks. It took a month till Mommy came to us.

note: this is a kind of advertisement here, because the quality and fun level is so high with these things, that I could not stand not sharing with everyone.